I’ve complained a lot lately about the weather here in Minnesota. It’s supposed to be spring, and the mid-April norms are the upper 50s. And yet, the blizzard whipping through outside is oblivious to these meteorological statistics. The despair has me pondering geoarbitrage – the art of choosing a place to live best suited to meet your personal and financial goals…

I have a crush on Colorado, specifically the front range. I grew up in the absence of mountains, so when we had the chance to hike about the RMNP a few years back, I was in hog heaven. The views are great, but so are the smells. Instead of city pollutants wafting through, you get a hint of evergreen in every nose-full. Ahhh…

Add to the fact you get a lot more sunshine in Colorado, along with winter temps that occasionally bust into the 60s and 70s, and you’ve struck gold. So yeah, for me it’s all about geographic features and climate. Make it fun to see, smell, and explore. Give me a fighting chance to be drinking a beer out on a back deck in March, or even February.

I suppose I could do that here in Minnesota too if I bundled up, but I’m too afraid of white walkers sneaking up on me. They are quite vicious, you know.

Winter seems to grate on me more, the older I get. I’m not alone by any means. I commiserate often with others about being Nordic-averse or having Minnesota-Affective Disorder. Whining like a baby is okay I figure since even Mr. Money Mustache would howl at the idea of moving back to Canada.

I remember the first winter after the kids were born. I’d curl up on the floor in a fetal position, in front of the fireplace with the iPad, and study up on far off places like San Luis Obispo.

You’ll notice in that last link a couple of things – 1.) there are two Colorado front range towns among the happiest cities in America. Mountains and beer, All. Day. Long. 2.) the list is produced by my favorite source of science on happiness – the Blue Zones study.

For sh*ts, did you know that the Blue Zones author, Dan Buettner is a Minneapolis native? No wonder he made this topic his quest. Get out of Dodge, young man!

Plain and simple, if you’ve reached financial independence, but feel trapped by your location, you’ve only solved half of the equation. This is why location independence matters. Besides, there could be some very sound and appealing reasons to migrate, if health and longevity are a priority for you.

The Best Cities for Geoarbitrage

Being a spreadsheet wonk, I can’t resist mixing up a mash of statistics and weighting criteria until I tweak the outputs to DEATH. Here’s the latest version:

A couple of interesting things to point out here: 1.) The front range is well-represented. Fort Collins and Boulder are fine towns (I’ve been to both), full of outdoor recreation options, good weather, walkable streets, and decent weather. 2.) Holy California, Batman! I guess you can’t argue with the near-perfect weather, rolling hills, and Pacific beaches, but the taxes and cost of living? Owie.

You can almost draw a fairly clear correlation between Geo Factors and Blue Zone Happiest. Charlottesville sticks out as an anomaly on Geo Factors – coming in with a high composite score despite less than stellar (but better than Minneapolis) Geo Factors score.

Interestingly, the Cost of Living has very little correlation with Happiest and doesn’t appear to influence the Composite score much. There is certainly a heavier correlation between Taxes in Retirement (state by state) and Happiest, but it’s pretty marginal.

The main thing to note here is that Taxes in Retirement (state by state) are all pretty high, save for Florida (3.00), and Texas (27.00.) Set those two outliers aside, and you could make the argument that higher taxes at an aggregate state-level correlate just a little to the Happiest Places in the U.S.

Criteria for Choosing Where to Live In the U.S.

While compiling this hack job analysis, I found the following exhibits very useful. I’ve always been a “maps guy.” Combining places and data is a powerful means to convey information. These two U.S. maps are no exception:

This map is loads of fun. Like the caption says, it’s interactive. As you mouse-over certain counties, you get a pop-up window with the overall geographic score for any county in the U.S. If you happen to live in Red Lake County, MN, I feel sorry for you. But not too sorry – since we’re in the same state!

The beauty of this research that was performed by the U.S. Department of Agriculture, is that it combines points of geographic interest, like water features, mountains, etc. with climate features like sunshine, warmth, humidity, and precipitation. No wonder then, that the California coast ($$$), Florida, and the Rockies of Colorado are in dark shades of green.

Luckily for us and the Airbnb Experiment, the cap on the mitten of Michigan is light green, thanks to the crystal blue waters of Lake Michigan and the large swaths of sandy beaches. Not many places better to be in June-September on this map.

You’ll notice that Anchorage, Alaska and Honolulu, Hawaii appear on the Blue Zones Happiest map above, but are excluded from this exercise. I felt it best to keep this exercise grounded in reality. Hawaii would be nice, but too far away.

Alaska is similarly too far away from everything. Heck, we already live in Minnesota, the continental Ice Box… Oh, and Alaska and Hawaii were excluded from the Geographic Features work done by the USDA above.

What to Consider When Choosing a Retirement Locale

You’ve likely got extended family nearby. If you’re fortunate like we are, you have wonderful neighbors. And friends don’t grow on trees, no matter how awesome you are. So you’d rightly hesitate to leave your entourage behind. Let’s not forget the jobs or businesses we’ve invested in. Whew! Moving is a tough proposition when those roots run DEEP.

We’re not throwing in the towel just yet here in Minnesota. There’s a lot to love about the state and the Twin Cities in particular. This exercise doesn’t factor in the quality of schools, but we know that Minnesota does well in this facet. Excellent restaurants, taprooms, and cultural outlets? We’ve got them in droves. It’s this winter bullsh*t that drives me nuts.

For now, I’ll hang my hat on the fact that Minneapolis rounds out the top 25 on the Blue Zones Happiest list. The aspiring stoic in me needs to buck up a bit. Or, the adventurer in me needs to be open to new frontiers. Certainly, there’s an inner struggle at play. If we were to move, ideally it’d be before the kids establish lots of their friendships and attachments.

And how would I possibly handle the rentals? Part of the idea behind my early retirement is using that newfound time to manage those houses. That includes upgrades, big and small. Were we to leave, I’d either have to sell (small chance of that) or hire a property manager for 6% – 10% of rents. Ouch.

Further, Mrs. Cubert has a chiropractic practice that’s doing quite well for itself. A lot of work has gone into this enterprise, to say the LEAST. Pulling up stakes would require selling the practice, and reestablishing a new one, somewhere else. New patients don’t grow on trees. It takes time.

It could just be that I need to sit tight and enjoy what early retirement will yield, as the kids make their way through grade school. Maybe when they’re off to college, the empty-nest versions of mom and dad can do the snowbird thing.

The way Vicki over at Make Smarter Decisions writes about Siesta Key has me yearning to visit Florida real soon. My folks winter outside of Naples, and we’re overdue for checking out that neck of the woods. The next inner struggle (of course) is going to be Mountains or Coastline?

I chose the combination of data with a bias on Happiness. The premise behind the Blue Zones is very appealing. Where you find very old people living independently, you’re bound to also find sunshine, community cohesion, more walking than driving, and better diets.

I’ll always use the Blue Zones as my “North Star” whenever considering the “where should you live” question. Short of moving, there are plenty of things you can do to live more of a Blue Zones lifestyle, if like 99% of us, you can’t afford to live along coastal California.

Keep checking back. I’m bound to write more about this topic as the days tick closer to my early retirement goal. Even beyond that date, I’m sure I’ll be strategically planning vacations to scout alternative snow-free and happy locales.

I’d also like to give a shout-out to Darrow Kirkpatrick, who does a nice job writing about the “where should you live” factor over at “Can I Retire Yet?” Definitely one to bookmark. 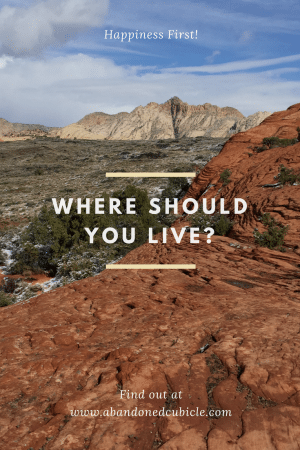 Previous Post: « I Got Laid off Without Warning: A Blessing in Disguise?
Next Post: Why Is It Important to Love Your Job? »