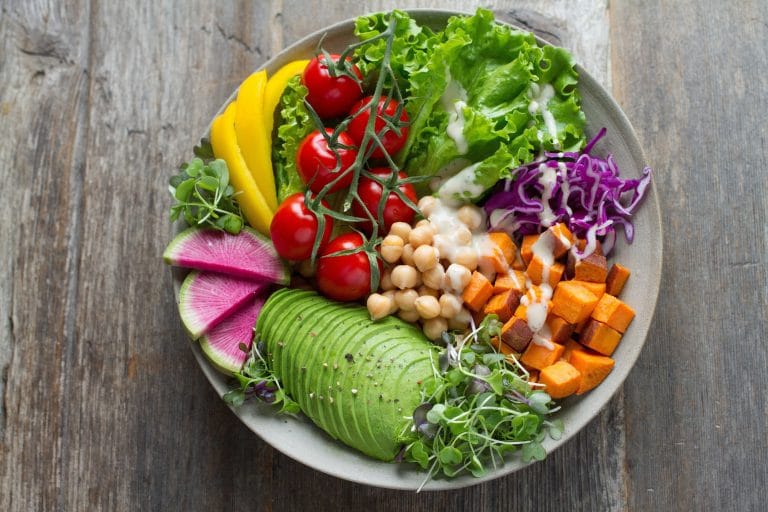 Put that burger down! Wait… Is that a veggie burger? If you’re curious about the benefits of being a vegetarian, read on. Is it possible to survive (and prosper) in a world of amazing barbecue?

Some fun facts (Special thanks to FoodRevolution.org):

Fascinating! I bet you’ve not only put down that burger, but you’re also probably gearing up to picket McDonald’s like those silly cows from the Chick-fil-A commercials: “Eat Mor (Fake) Chikin!” Either that or you’re willing to at least read the rest of this post to learn how to save thousands of dollars while improving yours and the planet’s longevity.

Why We Converted to Vegetarianism

About ten years ago, we were given a book, Mad Cowboy: Plain Truth from the Cattle Rancher Who Won’t Eat Meat by Howard Lyman. I read many passages out loud to Mrs. Cubert on a drive back to Michigan over Easter weekend. By the time we arrived, I sh*t you not, we’d made up our minds to never touch meat again.

Nothing like showing up at a family gathering and passing on the Easter ham. At least eggs were in abundance that day. Still, Easter dinner was a prelude for the awkward vegetarian vs. meat-eater dialogues to follow…

A relative or friend would ask, “So, why did you decide to go vegetarian?”

And of course, we’d hear the usual refrain, “I could NEVER give up meat. Do you get enough protein??”

Back to Lyman. Mad Cowboy was a serious eye-opener to the practices of industrial cattle ranching in the U.S. Everything surrounding that business is sickness: pesticides, synthetic hormones, herbicides, antibiotics to protect against the filth, disease, and death. A far cry from the pre-industrial ag days, when cows were allowed to roam freely and ate nothing but tall grasses.

Aside from the fact Lyman suffered through cancer, he also suffered through a frivolous lawsuit. After sharing his epiphany with Oprah in front of a nationally televised audience, a group of Texas cattle outfits sued. Oprah won. So I guess you actually can mess with Texas??

Knowing that your steak or burger comes from such a horrific source is enough to make you want to eat more chicken. (But then you can read up on the horrors of industrial poultry operations and then decide it’s okay to move on to falafel.)

Those first few years of vegetarianism went by without too much temptation from meat. Admittedly, it was tough to go out on a neighborhood run after work and smell someone’s barbecue around the bend. Usually, it was our next-door neighbor.

At around year three, I picked up yet another book, The Omnivore’s Dilemma by Michael Pollan. Fascinating stuff for a fairly new vegetarian to take in. There are LOTS of juicy nuggets (eh hem), and a few of Pollan’s conclusions warrant fair skepticism.

But the punchline is this: Prioritize local, traditional, organic sources of food (i.e., “locavorism”). Don’t rule out meat as a source of calories, so long as it’s from a sustainable source.

Good enough for me! Let’s fire up that Weber grill. It’s steak night. Organic, local, grass-fed steak, that is!

Nowadays, while the rest of the family is 99% vegetarian (eggs and dairy are still on the menu), this author is still eating meat. The catch is, rarely do I bring meat home since I’m the only one eating it. But once or twice a week, typically on a date night, for example, I’ll enjoy a steak or seafood option. Remember what Confucius said about moderation in all things? Rock’in it, baby! 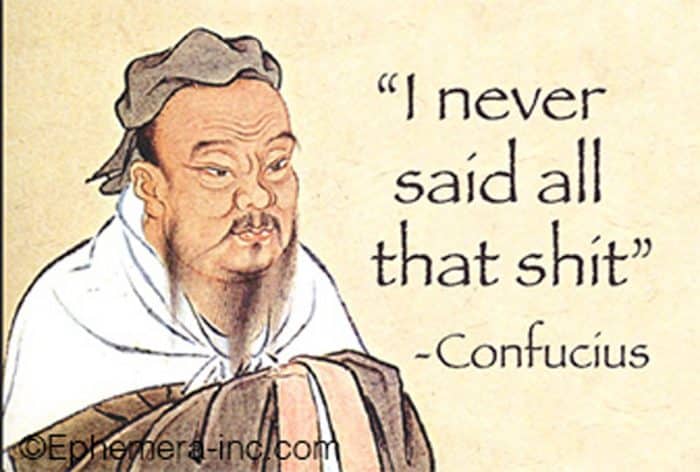 A vegetarian diet is healthier than the current standard American meat-frenzy diet. Don’t believe me? Check-in with our Seventh Day Adventist friends in southern California. A number of them might be over 100, and able to dance circles around YOUR sedentary butt.

Nevertheless, you’ve gotta be smart about a vegetarian diet. You can’t just swap your tasty quarter pounder with cheese for a Boca burger and fries. A common mistake is for new vegetarians to cling to their old meat-centric habits and replace their protein with the fake stuff. Or worse, those burgers and steaks get replaced with refined, processed carbs and dairy.

“No Big Mac for me, Fred. I’m trying to get healthy. I’ll take a couple of those apple pies and a strawberry shake though!”

Our early days of vegetarianism weren’t all that different. Never fast food, save for Chipotle’s fine vegetarian burritos. We rejoiced in Boca and fake breakfast sausage patties. Hallelujah! This new habit might not suck!

Ultimately, you’ve got to buckle down and focus on organic whole foods. Even better if you can harvest some small percent of your food from a backyard garden.

Being Vegetarian Saves You Lots of Moolah

Here’s where things get fun for money geeks, like yours truly. Think about the most expensive items in your grocery cart each week: Steaks, pull-up diapers, pork tenderloin, fancy single-origin coffee beans, and chicken breasts.

Eventually, Junior will outgrow the pull-ups, but you know you’ll never outgrow coffee. That leaves MEAT as the variable that can save us loads of cash.

So how much does the average U.S. family spend on meat as a portion of their annual grocery bill? Let’s find out! I found some helpful data that shows

Gallup data shows we Americans spend $150-$200 per week per family on food. That’s not including dining-out. Our family of four spends roughly $900 per month on food, and that’s sans meat.

I blame our super nice co-op and their organic goodness for this $900 extravagance. The USDA estimates a range of anywhere from $650 to $1,278 per month is spent on groceries for a family of four.

Even though we fall in the middle of that range, I shudder to think what our bill would be in a household full of meat-eaters. Some interesting data from NPR reveals that we spend about 22% of our grocery budget on meats. From that, we could extrapolate that if our household ate meat, we’d spend an additional $198 (0.22 x $900) per month on groceries.

Since our $900 already includes protein substitutes for meat, like eggs and beans, we should shave off some dollars. Though eggs and beans are pretty cheap.

Let’s take away four cartons of eggs (dozen each) at $3, so $12 total per month, and we’ll knock off about eight cans of organic beans as well (roughly $2 each for garbanzo beans, black beans, etc.): $16. Maybe we grill veggie burgers a few times a month, so take away $15 there.

The costliest protein substitute is NUTS. We go cray-cray at Costco with those giant bags of almonds, walnuts, pistachios, cashews, pecans, you name it. Even macadamia nuts find their way into our monster cart. The nutty thing is, we spend about $25 a month on nuts. All told, our protein substitutes amount to roughly $68 per month.

Bottom-line: We save roughly $1,560 ($198 – $68, x 12) per year as a vegetarian family. You know where I’m going to take this next, right? Over 20 years, you’d be able to squirrel away about $74,446 and change (via compounding gains in average index fund growth period). Enough perhaps to fund a few years of college for Sally?

Surprisingly, there is some credence to the notion that vegetarians don’t live longer simply because of their meatless diet. The Adventists might scoff at this, having found a 22% lower instance of cancer among vegetarians. We also have other Blue Zones populations (Okinawans, Sardinians, Ikarians) pointing us in a similar direction.

Most eat meat strictly on special occasions and rarely is it from a cow. Heart disease and red meat consumption have a long and controversial history together.

Here’s a kicker: You’ll find gobs of studies out on Google, some citing crazy big population studies over a longer period of observation. The numbers can be compelling. One Australian study found that after following a quarter-million people over the age of 45 for six years, there was no discernible difference in death rate based on a vegetarian vs. omnivorous diet.

The authors of the Aussie study suggest that it’s not simply the diet alone that gives vegetarians a ten-year lifespan bonus over meat-eaters. It turns out that vegetarians are simply more mindful of all other health factors:

And the punchline: “…vegetarians had a 29% lower risk of early death from heart disease and an 18% lower risk for cancer.”

Confusing, to say the least. But what the study’s authors are trying to convey is that simply abstaining from meat isn’t enough. This is what got our friend Howard Lyman, the rancher from Mad Cowboy into trouble when he started down the vegetarian path (Boca burgers and ice cream, all day long).

After changing his lifestyle to include daily exercise, veganism, and whole foods, his health improved markedly. Important for a cancer survivor, to say the least.

Another way to think of it: If Homer Simpson stopped eating meat but kept on being Homer, do you think he’d add much to his longevity? Duff beer and no exercise, while being exposed to radiation at Mr. Burns’s nuclear power plant likely wouldn’t do much for him.

My bottom line is this: All of the studies I’ve read up on, including the Blue Zones and elsewhere, have shown a strong correlation between limited or zero meat consumption and healthy, long life.

I love that Mrs. Cubert stuck with it. Our vegetarian journey started together back in early 2008. And even though I’ve backslid to 80% vegetarian / 80% primal, we’ve made it work for us. The kids are vegetarians too. But on occasion, if there’s bacon to be had, they become little Homers.

Oh. That “primal” thing… Yeah, I’ve read up on the Paleo and Primal diets, and for a year or so I practically doubled up on my meat intake. I’ve since ratcheted back to eating meat only once or twice a week on average. During that “full-on primal” stage, it was interesting to see how low my cholesterol and blood pressure clocked-in, despite all that extra meat and coconut oil…

The extra protein was a key benefit of my primal diet phase. When you hit your 40s, it’s time to ramp up your intake of protein big-time, since us old people struggle to process it as well. That said, there are plenty of non-meat protein sources available.

Mrs. Cubert keeps us well stocked with eggs, cottage cheese, beans, nuts, and vegetables high in protein. And if I were being totally honest, I’d have added in the cost of the large containers of veg protein powders that form the base of our smoothies. But then, if we weren’t a vegetarian household, I’m quite certain we’d still have some other sort of performance powder to add to our smoothies.

But the main point is this: The benefits of being vegetarian are not exclusive to saving a few nickels. Take some of the meat out of your diet today, and start looking forward to a healthier and longer life. Tabulating the cost avoidance of bad health and lost time would stretch way beyond the bounds of this post. Now go eat a salad. 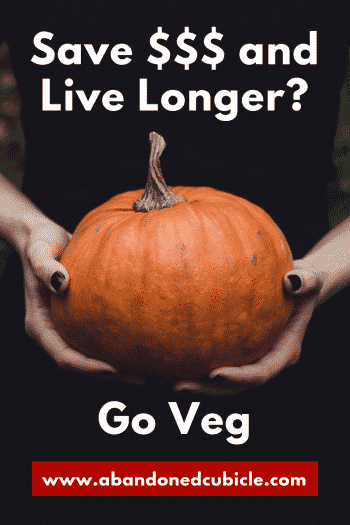 Previous Post: « How Much Income Does the Top 1% Make?
Next Post: How to Save Money With Cord-Cutting »