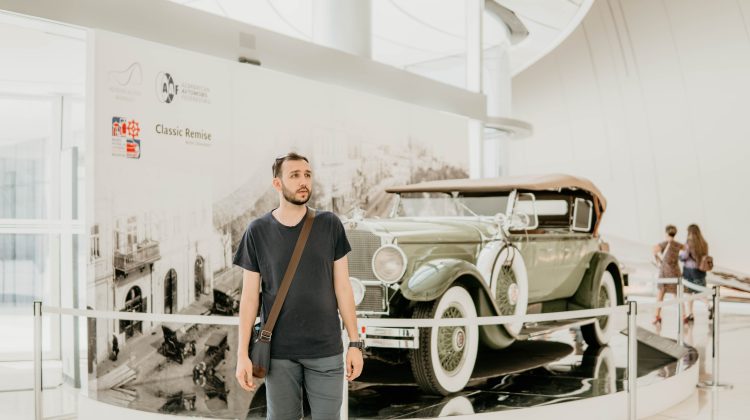 Sometimes even the most reliable wheels on the road need maintenance. My wee Honda Fit is no different. Sure, I enjoy pedaling my bike around town and even commute with that trusty two-wheeler, from time to time. But my Fit is a rock star car that gets me through wintertime commutes, kid pick-up, and landlord duties. She’s a righteous BEAST.

A few months ago my Fit stopped letting me into the back hatch.

Now normally, this isn’t such a big problem. I’m not the primary grocery-shopper after all. But if I have to tackle some maintenance at a rental, tossing toolboxes and other materials into the hatch is always preferred.

When the latch to the hatch got stuck, I figured the solution would be quick and cheap. So off to the dealership I went, hopeful and optimistic as ever…

Dealerships are swell places these days. The coffee machines are space-aged dispensaries of all kinds of sugar ladened caffeinated delights. There’s even free cookies and muffins to sweeten the mood while you wait for bad news from the mechanics.

The staff are pretty darn attentive too. Roll your car into what feels like a modern airplane hangar. The valet, err, customer service rep sprints over with clipboard in arm ready to ease your automotive burdens. This crew of hard workers even have matching uniforms.

I’m referring to the Honda dealerships in the Twin Cities mind you. I’m not sure if your Honda outlets are as Hollywood as mine, but don’t be jealous. Trust me.

There’s more that I appreciate about dealership repair shops. The wifi is SOLID. I can pop open my work laptop and keep up with tasks while waiting for anywhere from 30 minutes to a couple of hours, depending on the repair needed.

And if I get bored, I can swivel my chin over to the jumbotron TeeVee and watch a little Maury Povitch in high-def. There’s even a playpen for toddlers to frolic, and because Maury is so damn loud, youngling screams and whoops are usually drowned out.

How the Dealership Tried to Rip Me off

So by now, you’re wondering, why wouldn’t I take my car to the dealership for repairs? Well, for one thing, dealerships will charge you way more and they’ll make unnecessary repairs to justify those charges.

In my case, after waiting a mere 45 minutes, I got the bad news from my repair service rep. The hatch latch on my Fit needed to be replaced. Okay, I thought. No big deal, right?

It turns out that a Honda Fit ’09 hatch latch runs $1,200 plus tax for parts and labor. That’s a pretty stiff charge just to use the hatch door, ain’t it? I about spit my over-sugared dealership latte in the sweet service lady’s face upon hearing that figure.

Instead, I took a big gulp of free coffee, stewed for 10 seconds, and said to her, “I don’t think so.”

She politely escorted me back to her station (there are about a half dozen neat standing desks lining the runway inside this particular Honda airplane hangar) and rang up the “diagnostic” bill. I forked over $125 for the pleasure of being told I had to replace the entire latch assembly.

Defeated, I rolled back to work in my little red Fit. Hey, at least they gave her a much-needed mid-winter wash. But unless it’s a detailing, I don’t recommend a $125 car wash on this here personal finance blog…

This is a lesson, in my mid-40s no less, I should’ve had instilled in my financial “muscle memory” by now. Should I service my car at the dealership? Hehhhhll no. But here’s the redeeming part of the story…

Now that we’re all living in a state of lock-down (for good reason), many of us have extra time to deal with chores that have been low on the priority list.

I haven’t been driving my car anywhere of late, with work-from-home the new normal. Luckily, we have a couple of local, long-established auto mechanics within walking distance of our house. These are true-blue independent mechanic shops, mind you.

There is nothing “destination” about either of them. Even in a Me-Too world, you’ll likely spot a pin-up calendar behind the counter. There are no lady mechanics or staff at either shop.

The owner of the shop I took my Fit to heard all about my tale of woe at the Honda dealership. He made no promises, but he said he’d have a look and see what he could do. I wasn’t overly optimistic. I figured if the fine folks at Richfield Bloomington Honda can’t fix my latch without serious effort, no one could. I was just hoping my local mechanic could do the same job for less.

To my utter surprise and delight, my new best friend the independent mechanic called back later that day and said he got the latch working. It was probably jammed up with road salt and gunk (and a dash of spite for Minnesota winters). He lubed up all the moving parts and slapped the plastic back on.

Why Dealerships and Independent Mechanics Have Divergent Incentives

Dealershipships love to charge more for a few understandable reasons. For one, they have to pay for their Hollywood destination digs. Free Wifi and donuts are not so free after all. They’re also spending a huge amount on their friendly and prompt staff. I can’t tell you how many times I’ve tried calling a local mechanic only to have the phone ring and ring and ring with no one there to answer.

Weigh the pros and cons. Is it worth it to have a “cleaner” and perhaps friendlier experience with all of the amenities (wifi, kids play area, snacks, etc.) at the dealership? Or, can you stomach the grease-stained and cramped confines of a local, trusted mechanic?

For me, the answer is simple. Especially after this particular episode, I’m inclined to avoid the dealership for foreseeable future. $1,200 vs. $69 — who are you kidding?? If honesty and customer loyalty were a priority for Honda dealership repair shops, I could understand a bill of say, $200 and change for the same “clean and lube” job my local repairmen performed.

I think this is really what it comes down to. Not the glossy pros and cons Edmunds would have you believe. No. Find an honest and reputable local mechanic and avoid losing your shirt.

Dads and Dollar$ shared: It would take way more than one tweet to go through all of it, but I got ripped off when I was young and inexperienced. Suffice it to say that the place in question did not repair my car and made it worse than it had been when I brought it in.

My boy Freddy Smidlap offered this up: I ripped off a dealership on an insurance repair once. I got one back for all of us little guys. The general manager kept calling my house and I told him to come on over and take it back if you think you can.

This anecdote from the Gleaning Sage warns that even highly-rated shops can cause problems: I looked-up a highly-rated mechanic in Phoenix and told them I needed an oil change and a good once-over (because I was driving my 15yo Sentra to CO). They replaced the CV joint, did an oil change, etc. for $900. The next week, I start-out fine… only to get stuck in Grants NM. They had cleaned the battery terminal connector down to the width of floss so it broke and fell off as I went across AZ. When I stopped for a break in Grants, NM, the battery was dead because it wasn’t charging.

What about you? In deciding whether to service your car at the dealership or mechanic, where do you stand? Share your juicy story in the comments below.

So, Should I Service My Car at the Dealership?

There are situations where it makes sense to have work done at the dealership. If your vehicle is still under warranty, then many repairs can be performed without a fee. Oil changes are acceptable too, since you can often get a free car wash to go along with that complimentary cup of java (and sugar-loaded muffin).

But for just about any other repair outside of warranty that doesn’t involve an oil change? I’d think twice. From now on, we’ll be taking our paid-off sleds to the local guys. My biggest tip to offer is not to settle on one particular shop, but instead, rotate among 2 or 3 and build up a track record of experiences.

Better still, see if you can learn a few basics about auto repair, even just a little, to help you diagnose problems. Then you’ll know what you’re talking about when you step up to that reception desk. The coffee may not be as good or even free, but the money you’ll save could buy you a daily Starbucks drink for a full year (or a few shares of VTI!)

Featured Photo by aranprime on Unsplash