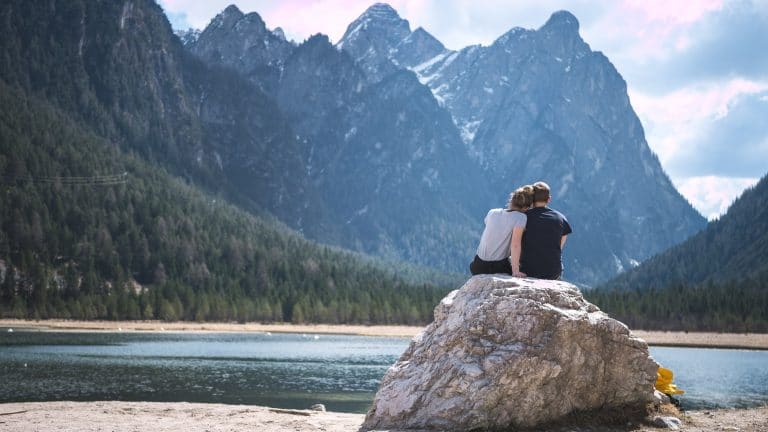 I’m spotting a bit of a trend. I might be way off my rocker with this, but it seems the idea of millennials not having kids is a mark of shame somehow to this generation. What I’m really curious about is whether this cohort is foregoing parenthood in order to retire early…

And why not?? Sure, get your financial act together first! Before adding the burden of childcare and limiting your ability to travel, eliminate that debt!

The scarier side of this: Is the lure of early retirement compelling millennial couples to not have kids at all, ever?? If you believe the nonsense published in sensationalist rags, you might be convinced to leave child-raising to your debt-loving friends and neighbors.

$500 grand is a LOT of coin (supposedly) necessary to raise two kids. And your ability to loiter on some beach in Bali would be put on at least an 18-year hiatus.

And then… KIDS! A little splash of reality after all that waterfall nonsense. Still smiles!

Millennials Are Causing a Baby Bust

Mr. Money Mustache is the ivory tower of early retirement. A rock star in flannel with a love of bicycles I can relate to. But if there’s ever been a post of his that raised the ire among the FIRE, it was his post about being allowed to have just one kid.

For those of us with multiples, it was extremely difficult to decide which kid to drop off at the orphanage. We ended up keeping them both, for the record.

Seriously though, I get it. The world is experiencing unsustainable population growth in many regions. Our consumerism is compounding the harm to our environment. That floating chunk of plastic garbage in the Pacific is now twice the size of Texas. (Don’t mess with Plastic Texas?)

So I get it. There’s more to the lecture than simply saving money and reducing sleepless nights. If we all applied China’s notorious one-child policy across the globe, we could have a fighting chance to preserve our resources and perhaps even mitigate flash-points of political and religious conflict. One can dream.

And I also get how having kids can put a strain on the marriage. As hard as Mrs. Cubert and I tried to convince ourselves to stay focused on our relationship right before the twins were born, the last five years have been 90% energy to kids, and 10% to us. Date nights help, but you need to stay committed to each other through thick and thin. Because there’s a lot of “thick” when you’re raising two little ones at the same time. (Cue the violins, please…)

Ultimately, our mustachioed guru from Longmont is careful, despite his post’s title, not to push his newfound epiphany. I’m glad he shared this thought, smack in the middle of the controversial, if not well-intended and informed post:

Having (or not having) kids is an extremely personal decision, and it’s not something that I (or your friends, parents, in-laws, church, government, religion, or society) should have much say in. It’s between you and your partner, and even then it is a questionable practice to try to force a partner into having more of them than he or she wants.

Not All Millennials are Opting Out of Parenthood

Far from it. Nothing is easy, don’t get me wrong. Simple acts like entering the dang house are a chore at ages 0-6.

E.g., How do you open the screen door while holding a baby carrier? The stoop is too small for twins. Who designed this house?!?

And when they’re a little older (toddler+), they start whining about not being able to press the thumb button themselves on the screen door latch. So you let them in, when you finally get a hand free (after they finally give up on the thumb-button, and pressing random keys on the keypad lock…)

And wouldn’t you know it? Once they enter the house, sand, mud, water, and something slimy from God-knows-where gets streaked across the kitchen, dining room, and living room, faster than you can catch them with keys, purse, coats, groceries, and the giant watermelon in your arms.

Let’s catch our breath for a minute. That kind of sh*t happens EVERY DAY.

But wait. Didn’t I start this paragraph with the notion of having kids not being all that bad? It’s true. Really.

You might be exhausted and sometimes stretched to your wits-end, but at every corner, there’s something new and unexpected. Our kids make us laugh and they make us proud.

The artwork gets better all the time. Instead of a violent scribble of crayons filling the page, we now have stick figures with discernible eyes, nose, mouth… and even a schlong, when my son is being mischievous.

For me, the unexpected part was getting to be a kid again myself. I’m man enough to admit how fun it was to unload my childhood box of Legos last year to the screaming delight of the twins. And thanks to the Internet, I was able to retrieve the missing instructions for those ancient space sets. Now to retrieve all those missing/broken pieces…

We now have a weekly (or biweekly) at-home movie night, complete with popcorn and smoothies! I’m enjoying some classic Pixar movies all over again. If you don’t know me by now, I’m counting the days until the kiddos turn six, when I’ll screen Star Wars for them. They better love it. Or else… (Insert ominous respirator sound effect here…)

How to Afford Having Kids

Now for the tricky part. Despite my best efforts to convince myself that raising kids isn’t THAT expensive, it turns out, it is. That particular post neatly whittles away the sensationalist $233K per kid myth. The problem is that whatever amount we agree is needed per kid, most of it is front-loaded.

Childcare costs are crazy for two working parents. We didn’t embark on real estate investing just to roll around in Washingtons. Nope. That money went straight to the nanny, for a solid four and a half years.

In fairness, very few are fortunate enough to have options like me and Mrs. Cubert do. Acknowledging that should have been the first disclaimer in just about all of my preachy, condescending, and smug-as-all-get-out posts.

Making six figures and choosing a minimalist lifestyle is a wonderful privilege. We’ve chosen to make the trade-off of less stuff now, for a more comfortable and freedom-laced future, later on in our lives. Simple.

And if you want to retire early with kids, that’s truly the only way you can make a go of it. (Unless you’re a highly-paid physician, in which case you can suffer fewer trade-offs while enjoying the FatFIRE lifestyle.)

Millennials as Parents: It’s a Choice

I hate to generalize, but from my standpoint, the millennial generation is LOADED with quality people who’d make amazing parents. This generation has been through some scary stuff during their formative years. It makes sense to put off having kids, especially if you grew up in a house that suddenly foreclosed, or stayed “underwater” for several years after 2008.

This isn’t a new phenomenon. The Great Depression of the 1930s can be blamed for a litany of “Back in my day…” quotes from Great Grandma and Great Grandpa. Don’t be surprised if millennials in 2060 are caught on tape muttering, “Back in my day, we lived in underwater houses. That’s right. We had to strap on fins and goggles to swim to school. And we had to swim fast to avoid the loan sharks.”

Susan Newman, Ph.D., writes about the “kidless millennial” phenomenon in an excellent piece, Should We Worry About Millennials Not Having Babies? You come away with a clearer picture, but the title’s question is left for time and statistics to answer, years from now. In short, millennials are simply waiting to marry and have kids.

I’m a Gen X’er and I remember all the buzz about our generation waiting until its late 20s to settle down and raise a family. Millennials are merely holding off a little longer than us, waiting to start a family until their early to mid-30s. It seems fair to me.

Another article from earlier this year paints a dire picture (at least, the clickbait title does). Joseph Coughlin’s Forbes article, Millennials Aren’t Having Kids. Here’s Why That’s A Problem For Baby Boomer Real Estate & Retirement goes for the jugular. All it takes is a few paragraphs to draw the same conclusion as Newman’s piece: Again, millennials are simply taking their sweet time to have kids. Funny read though, making us worry about whether ma and pa can sell their big house in the burbs when they opt to downsize, but wait, Sally and Johnny would rather live in an Airstream or Tiny House. Whaaaa???

My impression? The crop of millennials out there seeking early retirement and financial independence is no less inclined than their non-FIRE peers to have kids. They’ll fall right in line with the overall cohort trend of having kids later on. Smart.

And it’s smart because that’s what we did. Ha!

Mrs. Cubert and I are millennial wannabees. We waited until age 31 / 40 to start raising our own family. You’d call us out as impostors for not showing up at brunch to indulge in avocado toast and mimosas.

Do People Regret Not Having Kids?

The obvious advice from someone raising two kids of his own is not to let early retirement and financial independence come between you and having kids. If you are fortunate enough to have the option of bringing life into the world, you will find it a struggle and source of joy at the same time. (Just recognize that the mix of struggle and joy gets a bit uneven after two kids, depending on the situation…)

Take it from Darrow Kirkpatrick of Can I Retire Yet?

I did retire early, and I have a great life now. But, even with all the freedom of financial independence, here’s the truth: The days of working a regular job and raising my son were among the happiest of my life. There was (a) purpose, adventure, and joy in those family years that are harder to find at later stages in life.

So, in the end, I have absolutely no regrets about raising a child, even though it might have meant working longer. When I look back now, I know those were great times.

As for us, we didn’t even know early retirement existed when our twins entered the world, back in 2013. And even if we wound up stuck in our cubicles until 65, I figure a life led raising kids can yield the right mix of purpose, struggle, and joy to make it a life well-led.

And if you decide not to have kids? That’s a perfectly admirable choice to make. Having kids is a personal decision that no one should feel guilted into (or out of). The requirement to bring grand-kids into the world is an old fashioned notion. I’d be lying if I didn’t admit to sometimes longing for the days when Mrs. Cubert and I could travel or simply relax, sans kids. It’s a lot of work and the stress is real.

There’s some science to back up the notion that whether you have kids or not. The punchline? Kids or no kids, it makes no difference in life satisfaction. It’s ultimately a matter of personal choice and priorities.

Still, I hope the many bright-eyed and bright-minded millennial early retirees-in-the-making out there consider offspring. We could use a few more good eggs!