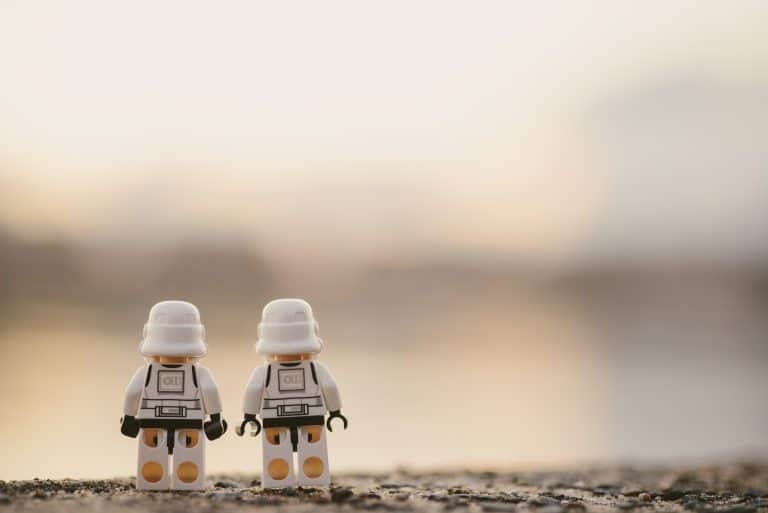 The nice thing about the occasional Polar Vortex is the unplanned bonus time you get to spend with your kids.

Last week, the kids’ school was canceled four out of five days due to the extreme cold. Sure, it was trying in some aspects.

This is the time of year when projects start to get rolling at work. Taking a few half-days off to watch the kiddos makes you wonder why childless people aren’t dominating the workforce…

So, what did we do to keep the kids occupied, while being stuck inside the house with minus 20-degree F temps outside? LEGO, of course! And this is a post that I’m sure will resonate with many of you.

Who among you fine readers didn’t grow up with those magical bricks? And those with kids? You probably have a few bricks stuck in your rug naps, dryer vents, and deck planks too…

Homemade LEGO Sets to the Rescue

Here’s the thing. LEGO ain’t cheap. You’ll pay about 5 to 10 cents per brick, and with most kits averaging around 300-400 pieces, you’re dropping $30 for a pretty basic set. The co-branded kits, like Star Wars and Harry Potter, are especially pricey, at about 10 to 15 cents per brick.

Some people go hog-wild over LEGO. They can be an addiction of sorts. One guy built a large replica of the Titanic with 40,000 pieces!

From what I’ve read, adults have been using LEGO as a way to destress and decompress. Building something either from the instructions or with your creative blueprint can provide a form of therapy. I watched a YouTube video with my son about a troop stationed in Afghanistan who had kits sent overseas to him. Now back in the states, he builds sets to keep the PTSD at bay.

So, we know these toys are very expensive, but they’re also a source of joy and can offer some real mental-health benefits. I hope to keep our little household collection alive and well, but with a frugal spin on the situation.

This is easy enough. If you had LEGO as a kid and you’re still hanging onto them, don’t let them sit in the attic collecting dust. Dump ’em in with the kids’ collection and be glad they’re being put to use.

I had a five-pound tote of plastic from my childhood — all classic LEGO space kits.

The kids have no problem plugging those gray and blue pieces into whatever they create.

Now you’ll know how we spent our free time during the Polar Vortex last week. Papa had a crazy notion that all the random kits combined, including some donated pinks and purples from my daughter’s Friends collection, would be sufficient to build a… LEGO DEATH STAR!!

For some background, the LEGO Death Star kit is massive. It’s a $500 kit ($500!!!) before tax… and includes 4,016 of the finest black and gray plastic bits you could ever hope for in your collection. But who’s going to deny the most fanatic of Star Wars fans??

This thing SELLS. I have a colleague who bought this kit for his sons for Christmas a few years back. They proceeded to drop the completed ball of parts on the kitchen floor, to simulate its destruction. Ugh. A friend of our kids got the same kit just this past Christmas. She’s 5. And LOVES IT. (Apparently, Daddy only gets to sort and supply parts to the builder.)

But ask Cubert if he’s going to plop down $535 and change… Nope. Thanks to LEGO’s altruistic understanding of how the instruction booklets often get lost or shredded by the dog, they offer PDF versions online. So, I decided to download the official LEGO Death Star instructions and go for broke.

Want to know how many pages this novel is? Two Hundred and Sixty Four!!! Gulp. But we all chipped in though, and before long, the Death Star began to take form. Only this version would be known as “Disco Death Star”, thanks to those beautiful purples, blues, oranges, and yellows that blend in with the grays and blacks that dominate the real deal.

Nothing like a Midwest cold snap to reaffirm your love of plastic bricks, right?? Well, to be honest, we got about 75% of this monster completed before we ran out of vital pieces. As Darth Vader said at the end of Episode 3, (or as I said at the end of The Last Jedi) “NOOOOO!!!”

What’s a loving father and mother to do? We both scoured eBay and Facebook markets for spare parts, of course! Eventually, I stumbled upon a five-pound collection of a mish-mash of Star Wars kit pieces. Buy it Now cost? $30. Granted, shipping was $20. Still, for $50, we were able to finish this project 99.7% to specifications (if you are color blind).

Bonus: We now have lots of extra gray panels and parts to begin construction of the Millennium Falcon. Yay!

Ultimately, we had little problem plunking down $50 to complete what otherwise would’ve been a $535 kit, if purchased from Amazon, Target, or wherever. Our kids would probably disagree, but the added challenge of hunting to find pieces we weren’t sure we had was all part of the fun.

When you buy the kit – it’s all there in sorted packages. You just do the grunt work. On the flip side, if you try a hair-brained idea like mine, and download instructions with the HOPE of having the pieces, you’ll be playing scavenger hunt for hours in those multi-colored bins.

Oh, that reminds me. One last tip – It helps to sort your pieces by the color groups before taking on a project like this. Happy building, kids!!

We Even Made a LEGO Millennium Falcon With Random Bricks

Here’s the latest from our overflowing LEGO studio (i.e., my home office): Notice once again how we’ve ignored color if favor of form and function. You would surely love these “Disco Star Wars” creations. Last I checked, the LEGO Millennium Falcon kit we built costs $160, before tax.

So again, check the LEGO.com site for instructions and you might be surprised what your monster collection can build. Save the planet, one plastic brick at a time! 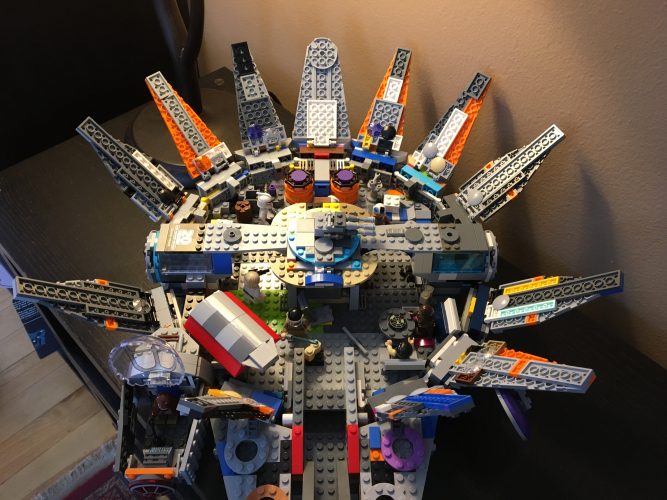 We built a sweet little Minion my daughter thought was the bomb. That was just the beginning. I then helped my son build a very cool LEGO Optimus Prime.

There’s no limit to what you can build with these amazing bricks. In most cases, our ideas are better than the original kits themselves.

So, if you’ve got a big pile of LEGO bricks to start with, find an interesting project on LEGO.com with retail instructions, or, get creative with those YouTube clips.

Either way, you’ll find hours upon hours of fun without dropping major money on expensive plastic!