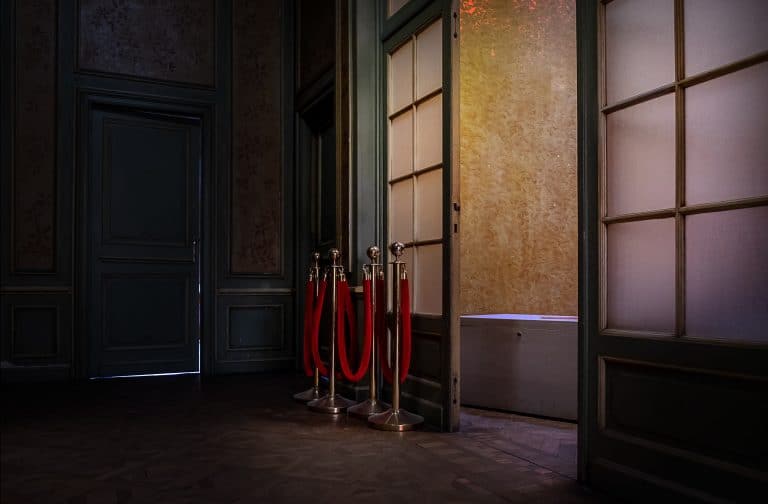 There’s never enough room in a small house. If I want to buy a Foosball table, I’m screwed. If Mrs. Cubert wants to bring home a rowing machine, we’d have to lose our second family room. Finding a cheap minimalist home theater with a stellar picture and sound is a daunting proposition.

Home theater is an investment I’ll make room for ANY day. Before the kids came along, I had accumulated various components to fudge a semi-decent system. I had a pair of B&W speakers and monster sub-woofer, and center/surround speakers from Boston Acoustics.

Throw in a $400 bleeding-edge DVD player from 1998, and I was set. Shoot, I even put good money down on Monster Cables. Because, you know, if it’s Monster, it must be better…. (Ultimately, I later found out, this is only true if you invest in their heavy-gauge copper speaker wires.)

The catch? My TV was always the runt of the operation. I had finally acquired a piecemeal audio array to blow the walls off the house but was still stuck with a cathode-ray 27″ color TV. Not even innovative “S-Video” could save me.

We finally upgraded to a 32″ LCD flat panel about 12 years ago, but by then, all of the good content was coming out in widescreen (aka “Letterbox”) format. Talk about a proverbial kick in the nuts!

“Oh, I’m sorry, were you hoping to not have to squint at this fine DVD production? We in Hollywood figured you’d enjoy viewing a film with 40% of the view-able area unutilized.”

I know, I know. I could’ve changed the setting to 4:3 crappy cropping, but who wants to miss the action off to the peripheral far left and far-right? There could be Jawas hiding behind those rocks!!

Long story short, I had half of the equation for home theater solved, and then our awesome kids were born. It was then that I realized our priorities for the next several years would not be watching Lord of the Rings marathons, but instead, managing baby and toddler duty in one of the more exhausting (and yet somehow rewarding) marathons of our lives. SO, I sold all that shit on Craigslist.

Getting Back in the Home Theater Arena

That was almost six years ago. I got some handsome cash selling off those B&Ws, lemme tell ya. We did keep the 32″ LCD and later picked up a slick Samsung 40″ LED for the main living area. We got hip with streaming, adding an Apple TV 3rd Generation brick to the mix. The minimalist in me sent the Blu-Ray player down to the basement, right around the time we sent Comcast packing.

For the last five-plus years, I was happy to get my big-screen fix by, well, going to the movies! Every six months or so, some big releases would come out that gave me an excuse for a little “me time”. Or, I’d take a nephew to a show for his birthday gift. “Let’s go check out Guardians of the Galaxy!” or “Hey, I hear another Star Wars movie just came out?”

But a neat little phenomenon has emerged over the last year. Our kids are now 5 and able to sit through a feature-length movie without getting bored. We now have movie nights at home. And it’s lots of fun: stove-top popcorn, rum and cokes, and $3.99 to rent just about any movie off iTunes that Netflix doesn’t offer for free.

Still, that 40″ inch screen leaves a little something to be desired. I may be alone in THIS house on that feeling. Mrs. Cubert and the kids are happy as clams with our current setup. And heck, I’m entertained too, even without a soundbar in the mix. But there’s a special circumstance on the horizon. Of all the reasons I ever wanted home theater in the first place, the original Star Wars trilogy (GEEK ALERT!!!) was my nirvana.

Simple equation folks: Our kiddos will be six later this year. I was six when I first saw Darth Vader charge down that rebel ship corridor, sometime in the late 70s. So yeah, Papa is wanting to recapture some of the magic through the eyes (and ears) of his kids. As the mean old Emperor said in the Empire Strikes Back, “Can it be done? Do we have the credits??” (That second part of the quote is unofficial.)

What Is the Best Minimalist Surround Sound System?

Shopping: A love/hate relationship that many of us frugal types STILL struggle with. I kind of enjoy it from time to time. The occasional trip to the big mall (twice a year at most) keeps it a novel experience. People-watching and other stimuli sure beats sitting at home pretending to be smarter than everyone else. To be fair, I’d always choose board games at the local pub over shopping for relaxing breaks from Minnesota cabin fever.

But I digress. The kind of shopping I’m talking about here is online research. When I need to figure out what’s simply the best, I’ll dive into online reviews, YouTube clips, Amazon ratings from supposed purchasers, and so on. After a while, the eyes glaze over from thumbing through all that jazz on the iPad Mini.

Conclusions? For our sound upgrade, the options I narrowed down to are these:

Why the BEEF would I even consider option A?? It’s $1,100 MORE than option B. There’s just a couple of reasons, but neither of them probably sings to me enough to pull the trigger. One, Sonos is like the Apple of home theater speakers. They are branded quite well and designed smartly. That’s appealing to me. But how much of that is marketing vs. real value??

When you spend hours researching multiple reviews and such, you figure, “Do I want a super expensive system sitting within spill-range of the kids’ Hawaiian Punch??”

And you figure, “Heck. We have a small house. Our 1,500 square foot of living space doesn’t need to sound THAT big.”

And then it dawns on you, “Wait a minute, I write a blog about not spending lots of money on crap you don’t need. WTF, Cubert?!?!?”

How Much Does It Cost to Setup a Minimalist Home Theater Room?

The 40″ upstairs won’t cut it. And certainly, the 32″ downstairs in our future home theater room won’t cut it. Gotta go big or go to the movies. But I don’t know if Disney will release the original Star Wars trilogy at the megaplex theater anytime soon. The kids, truly, deserve a big-screen presentation of this classic series. A-hem…

What I’ve learned throughout my research: size matters. When it comes to screens, THX (the granddaddy’s of home theater wizardry) suggests 90″ for a fully immersive experience. Wow. That big. Unga Bunga. Our basement wall isn’t even big enough to support that monster.

Thankfully, there is a lower end of the size spectrum that works. A 65″ screen will fill enough of your field of vision while sitting 9′ away.

STILL. That’s big. Tremendous even. I’ve sat in front of my in-laws’ 60″ behemoth and almost got nauseous. (They left the default high-color motion settings on, so it looked like Sheldon and Howard were about to pop out onto the coffee table.)

I’m gunning for 65″. If I’m going to give a little on the audio side of things, I could use the savings to ensure the picture quality is top-notch. Again, my research has been online and bolstered by lovely YouTube reviews.

OLED is good. But it’s also really expensive. You’ll drop over two grand easy on a quality OLED by LG or Samsung. There is an alternative set from Vizio (the Costco/Sam’s Club stalwart) called “Quantum” that comes close to OLED quality, but for a lot less dough. How much less? Not a lot less. It still costs $1,800 last I checked.

I can count on two hands the things I’d rather be doing on a given day, than sitting on my bum watching a big fat TV in our basement: Playing cards with friends, checking out a new taproom, exploring new paved trails on my bike, etc. etc. etc. So why am I even considering this coin drop?

Well, Winter has something to do with it. Our newfound affinity for family movie night has nicely coincided with the bitter cold and snow that’s now upon us. There’s only so many LEGO Death Stars you can build before your fingernails cry “UNCLE!”

Maybe I could make the argument of how much we’ll save by not going to the theater to watch movies. But that opportunity cost argument is a bit of a stretch since we aren’t big theater goers anyhow.

There are some potential uses aside from movies though, right?? I mean, we have a Nintendo Wii. Maybe it’ll be fun to Wii Bowl on a mammoth screen, with pins falling in heavy bass. We could host a Super Bowl party next year. Workout DVDs would be IN YO FACE!!

It all comes down to whether the annual bonus comes through in the next couple of weeks, and a decent enough amount. We’re still trying to pay off our mortgage, and set aside cash for our Financial Independence wad. Priorities, man. Priorities.

What helps?? After five years of paying through the nose for childcare, we’re finally catching a break with “free” public school and after school programs that are a LOT less expensive.

Do you have cheap minimalist home theater hookups you’d like to brag about? Please share in the comments below!