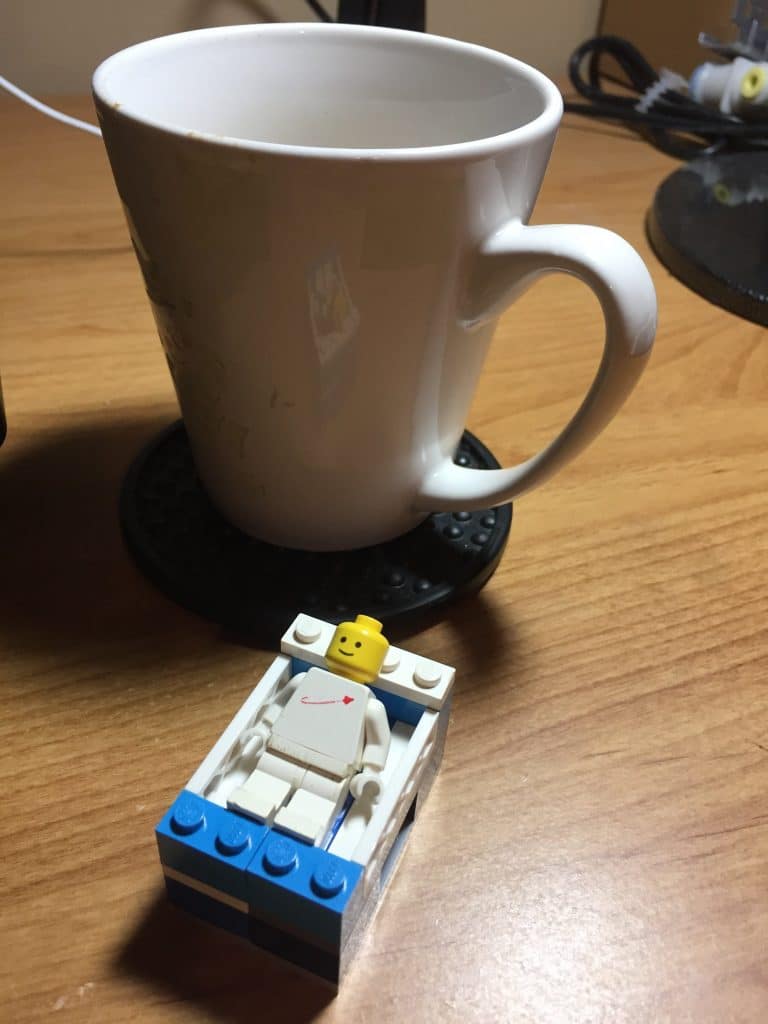 Of course, it doesn’t have to be crazy at work, right people?!? Although the last three or four weeks have been nothing short of crazy for this part-time blogger and full-time corporate animal. The wages of promotions are death, as the saying goes…

Welcome to a post that explores remedies to the nonsense many of us deal with day in, day out. A big part of what makes the hamster wheel such as a crap sandwich is the inefficient way we work. So let’s experiment and see if this nifty paperback, It Doesn’t Have to Be Crazy at Work, by authors Jason Fried and David Heinemeier Hansson has truly actionable bits between its covers.

The thing I like about this surprisingly quick and engaging 240 pages is that it’s contents are completely unexpected. Here we have a tech product company (Basecamp) that’s been around since 1999 and has essentially done everything counter-intuitive to what you’d expect of a youngish innovation firm.

You’d expect long hours, supreme commitment to the cause, a misguided “family” culture, a chaotic open-air shared workspace complete with free Cheerios and Red Bull, and wide-ranging salaries based on “talent” supply and demand. Nope. None of that, according to the authors, apply to Basecamp.

What Changes Can Make It Less Crazy at Work?

Sprinkled throughout the book are caricatures of successful writers, academics, and business people, all of whom manage to produce staggering amounts of quality output (books, theories, and so on) by compartmentalizing their day. Charles Dickens, for instance, spent maybe five hours writing on a given day but then would take a 3-hour walk to re-energize.

Concentration, focus, and a “quiet culture” best describe Basecamp’s philosophy to how work gets done. Interruptions from meetings, emails, instant messages and so on only serve to create an office environment conducive to distraction rather than output.

Whenever I see a millennial with headphones on at his or her laptop, I’ll have a newfound appreciation for the desire to FOCUS. Dickens would’ve killed for those headphones if he had to pen a novel in our modern so-called “workspaces”.

“Crazy” authors Fried and Heinemeier Hansson liken the Basecamp office arrangement to a library. Where else can you go where silence is universally expected (and even enforced)? And why such strict rules?

We expect libraries to reflect a community center of focus and learning. And a quiet setting is typically one best suited for our brains to settle down and hone in on new concepts (and creative pursuits alike).

Beyond the four walls, why not impose strict rules about a sane 40 hour work week, with 32 hour work weeks during the summer months? And if that doesn’t sound enticing, how about a 30-day sabbatical every three years, to do whatever the hell you want? Wowie.

Keep in mind, Basecamp isn’t some flash-in-the-pan startup out of Silicon Valley. This Chicago-based firm has been around for 20 years and is highly successful. With over 100,000 clients and growing, they’re doing something right.

For Basecamp, their benefits and approach to a sustainable workforce were intentional from the start. Some practices were refined over time. For example, they tried “unlimited vacation” but it failed. You can guess why.

Everyone gravitates to the lowest common denominator out of fear (or FOMO I guess): e.g., If Jesse is only taking a week and a half of PTO this year, I better only take that much too, to show my commitment to the cause…

How Basecamp Differs From Most Corporate Cubicle Environments

Let me count the ways… There are some campuses in my company with a shared workspace environment. Everyone hates it. Only the bean counters with an affinity to savings on real estate costs appreciate the germ-ridden, anti-concentration pens from Hell. Basecamp recognizes the value of (ha!) cubicles to allow individuals space to let their minds focus and create.

My company sets pay based on talent supply and demand. Only managers know what some team members make. The ones who report to them anyhow. And it’s all over the place. Try as we might, we struggle to build equity within pay grades. And bonus dollars? We have an artificial system of “performance-based rewards” that leaves many contributors empty-handed year after year.

Basecamp, on the other hand, pays its staff equally, and gets this, within the top 10% of industry wages, even if those wages baselined with San Francisco figures. (I’m about to apply for a job there after publishing this post, how about you??)

My company feels it best to reduce the number of telecommuting employees. Conversely, Basecamp encourages applicants from remote locations. If they can produce quality outputs, what difference does it make if they do it from the office or their living room sofa? (And wouldn’t you know it, there’s a byproduct savings on physical office space. Mind-blowing.)

My company encourages death through meetings, emails, and IMs. I think 80% of my job is simply responding to someone else’s email or sitting through a meeting where the value I add is suspect. Good thing I remove the occasional obstacle and recruit strong team players.

Otherwise, I’d have to ask what real value am I adding to the “mission”? Basecamp makes it challenging just to set meetings on employees’ calendars. They encourage a radical old-school concept called “office hours” to allow questions and answers in set time frames. Supposedly, it works.

My company does not offer paid new-parent leave for fathers or partners. Basecamp offers six weeks.

My company does not offer paid massages. Basecamp gives employees $100 a month to stay loose.

I could go on, but it’d make me wistful.

Crazy at Work? Apply to Basecamp!

(Don’t get too excited – They employ less than 100 today, so spots are quite limited.)

Maybe I’m truly ready to step away, despite some recent hiccups in my grand plan. Or, maybe I just need to find a company like Basecamp to call home? Heck, even the way they recruit talent inspires food for thought. They don’t grill applicants with “think on your feet” questions and byzantine riddles. They have him or her do some of the work. Novel idea! Gee, can this person code, or find bugs in code, or design a fantastic interface? Let’s not rely on the resume and a half-hour interview for that — let’s roll up sleeves.

I probably won’t switch companies at this stage of the game. But man, if I did, I’d give this shop a ton of consideration. Seldom does it work out as swimmingly as a book would make it sound? It still works and you’ve still got to produce. But the founders have their heads in the right place. They understand the notion of sustainability when it comes to retaining employees.

Who’d argue with keeping long term talent, over having to constantly hire in and retrain newbies? Sadly, most companies continue to argue against the simplicity of sustainable employment, opting instead to look at its workers as bottom-line figures on a spreadsheet, rather than the beating heart of the organization.

As for this particular cubicle jockey? I’m glad I find time to read. I’m glad I found the time to put back the 240 pages of “It Doesn’t Have to Be Crazy at Work” on a snowy Saturday. I dogeared the sh*t out of that book and I intend to be bold and put some of those lessons to the test. We’ll see if a small amount of change from inside the whale can stick. Or we’ll see if I instead get shot out of the blowhole instead. 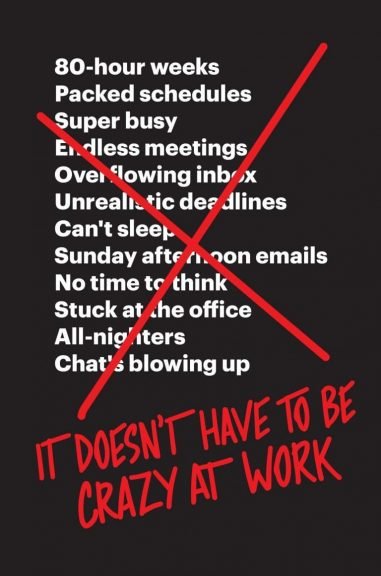