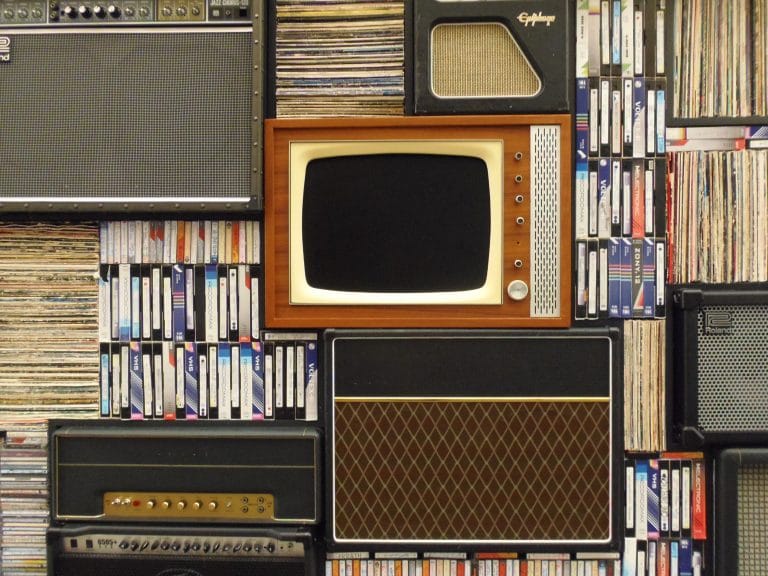 I’ve got to heavily caveat the title of this post.

We enjoy TV in our house, but only in very small doses. Cord-cutting continues to grow. People are ditching cable, but typically only to switch to dish or Sling or streaming services. Wondering how to watch TV without cable or satellite and still get quality high-def without breaking the bank? Read on!

In our household, we’re all about the Apple TV (though since this article was published we’ve switched to using the Amazon Fire Stick). The tiny little box is the only piece of equipment that sits under our flat screen. Minimalism at its finest!

During a single hour of nighttime viewing, Mrs. Cubert and I enjoy a little Netflix and a few segments of late shows via YouTube. It’s a decent amount of entertainment for $14/month (Netflix streaming subscription).

You Can Get Local Channels Without Cable

We occasionally watch network TV too. A handy high-def antenna grabs all the free channels over the air and delivers shows with an amazing picture. Not that we watch just any shows. The antenna in our house is almost exclusively used for viewing Big 10 football in the fall since The Biggest Loser got abruptly canceled a little over a year ago.

Back in my day, TV had its limits. Despite the size and weight of the appliance, the image and sound were pretty crummy. We’re talking 70s and 80s cathode-ray tubes here.

Remember those ginormous TV consoles Grandma and Grandpa used to have? A 19″ screen surrounded by a massive oak wooden cabinet to house all those Jim Nabor’s LPs… Angelic voice. R.I.P., Gomer.

Ahh, nostalgia. As a kid, I’d wake up early on Saturdays to watch a good hour, hour, and a half of cartoons. On weekdays after school, there’d be a daily dose of Warner Bros. and the Flintstones for at least an hour. You could say I took in a lot of repeats over the years.

As bad as 7 hours of boob tube a week for a kid seems, I wasn’t like Jim Carrey’s character in the movie Cable Guy. I had the luxury of living in an era of free-range kids. There was plenty of biking off to here or there or building snow forts with pals in wintertime.

Besides, when you only have four legitimate channels (NBC, ABC, CBS, and PBS) growing up, your options are fairly limited. Once upon a time, your TV time depended on a set schedule. Soaps during the day, cartoons in the afternoon when the kids got home, news, then sitcoms, dramas, Johnny Carson, the national anthem, then static.

Those days were so simple and choices so limited, that you had a reason to pull out the Monopoly board every so often. And that was when you knew you couldn’t stand to sit through another edition of Hee-Haw. Today? Today it’s all on-demand, big screen, and high definition. We’ve been seduced by the Dark Side…

The Benefits of Cord Cutting

With superior viewing technology and a growing library of quality television at our beck and call, it’s even more important to recognize the benefits of pressing the OFF button. There’s more to life than reruns of Gilligan’s Island.

No one would argue that. But take away my The Bachelor or Dancing With the Stars? Just you try to pry this remote from my steely grip, fool!

This is the best unscientific list I could come up with. I encourage you to share any other obvious or hidden benefits I might have missed, in the comments of course.

Since we masquerade as a personal finance blog in these parts, let’s consider those hard-earned dollars saved by TV avoidance. Multiple studies have the average household bill hovering right around $100 a month.

Not I said the Cable Guy.

All those other benefits are even more substantial than the money. A TV is notorious for commanding our attention away from real human beings all around us.

The exception to this rule is Super Bowl parties, where no one pays attention to the TV until a witty commercial or Janet Jackson comes on at half-time. Give the remote a rest, and play a no-holds-barred round of UNO with the family instead.

Health-wise? I get back pain if I sit too long watching the tube. Not to mention in the evening, after just an hour of Better Call Saul, my eyes start to well up. Those tears aren’t being shed for Hector Salamanca either.

It’s because of the eye strain from watching that hideous blue-light machine without blinking enough. I think I need a lawyer…

I can’t quit you. Dang Netflix and your ever-improving original programming. The good news is that there’s been a massive infusion of original dramas and series from non-traditional sources over the last few years.

This is in response (I think) to the utter dumbing-down of network television with its exhausting reality shows. Big Brother leaves a few cells lighter in the front cortex.

So yeah, the temptation is there to stay plugged in. The key is to moderate as best you can and find creative ways to limit or wean off the mad box entirely. As minimalist as I am personally, I’m not going to advocate you ditch TV altogether.

If you live in Minnesota through 7 months of iffy weather each year, indoor distractions are often hard to come by. Besides, State is taking on Michigan in a few weeks!

Granted, we just signed up for Disney+ and we’re pretty excited about that. We’ll see how much entertainment we can get out of $70 per year. I think it’s a steal.

So in the spirit of SemiFIRE, simply look for ways to cut the viewing time in half. See if you can find the will to cut the screen size down a bit as well, to open up the room for human interactions.

Replace your vapid reality shows with some well-written dramedies or Nova replays. And if you have cable still, think about cord-cutting. You don’t want what happened to Steven M. Kovacs to happen to you…