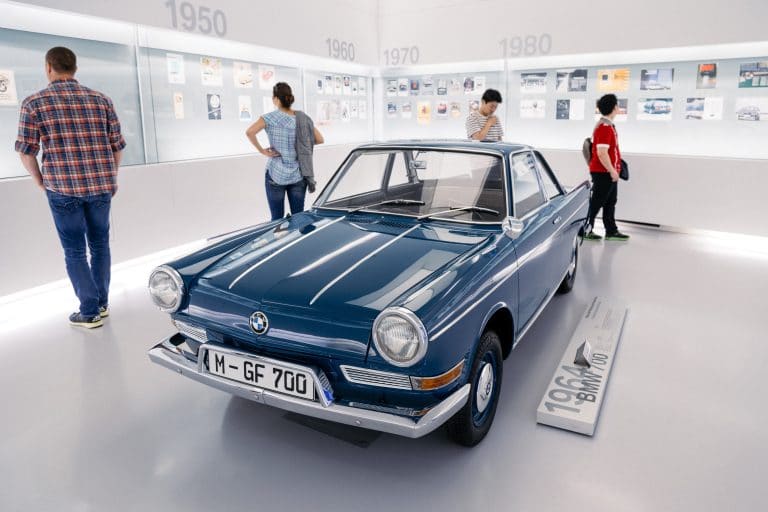 Generally, I’m not a fan of driving.

I’d rather walk or ride my bike given the choice and considering the distance involved. Last night was softball double-header night, and the team needed me there on time, ready to bobble that first grounder…

The BMW Drivers Stereotype Is True

So I’m on my way to the playfields, working my way deftly through traffic in a tiny 2009 Honda Fit.

Conditions are fine. The sun is shining. There are no potholes or random deer crossings. I don’t even have to compete with Tour de France wannabe cyclists who often suffer from road rage too.

Then, I attempt to make a lane change from the right side of the road to the left, so I can get into the bloody left turn lane…

Thinking I’d made the lane change without incident, my rearview reveals a zippy blue BMW coupe, complete with a road-raging driver. That beast came right up on my tail faster than a fly zipping over to a fresh pile of cow $hit in rural Wisconsin.

My new friend could’ve cared less about my need to change lanes. While still kissing my rear bumper with his front, he flashed his headlights, honked his horn, and sped away at 60 MPH in the 35 MPH zone.

“What an a$$hole”, I thought as I yelled out “A$$HOLE!” while sticking my middle finger way, way up in the air…

Needless to say, I made that left turn. The thing I’m not so proud of is how I reacted to the situation, flipping my mild-mannered lid. The BMW serenade of a honking little Beemer horn will do that to you.

Why Are BMW Drivers Hated?

Did I mention how lovely a BMW coupe’s horn sounds? It sounds like precision German-engineered luxury: Cat strangulation in the key of Beethoven. More or less.

I’m guessing some of you fine readers can relate to this situation. The culprit doesn’t have to be a BMW, though 92.5% of the time it IS.

I found myself in a road-rage stew that gripped me for several minutes. That’s quite a distraction when deciding whether to act out like a d*ck too, or do the smart thing: Focus on driving and simply flip that arrogant idiot the bird.

Still, the adrenaline keeps flowing. You’re all jazzed up. I finally eased up in time for softball. That extra aggression jolt might’ve helped me at the plate but I eked out maybe a couple of hits at best.

(Beer helps salve the mental wounds after encounters with idiot drivers. Sadly, the men’s league I joined doesn’t allow beer consumption near the fields. No more church leagues for THIS GUY.)

Why Are BMW Drivers So Arrogant?

BMWs are known as the ultimate performance mass-market car. They are meant to be driven hard. So it’s no surprise that these cars wind up in the steering hands of aggressive hard drivers.

Sure, Audi and Mercedes make fine autos, but BMW is not a luxury car so much as it is a racer in sheep’s clothing. (Thank you, Top Gear.)

A friend of mine from Europe would fully agree. Over the years he’d driven a Mustang, Subaru WRX, and other turbocharged cars. He now prefers BMWs.

Thanks to his company, he even gets to drive a Bimmer without having to make a monthly car payment. Jerk. And guess how he drives? “Aggressive” doesn’t begin to describe the wicked lane changes and speeding with abandon.

I will concede it’s a rush to be in the passenger seat with my buddy when he’s driving like a BMW maniac. But if I didn’t know him and love him as a dear friend, and encountered him on the roadway, I’d think he was a complete idiot. (Hugs!)

If you’re the type who’s skeptical, or, you don’t live in a part of the country with BMWs, keep reading…

We can even pinpoint Blue painted BMWs as the harbingers of the apocalypse.

Fascinating stuff. Who knew you could tell the kind of person by the car he or she drives? I think at some level we all fall prey to stereotypes. I have a few choice ones for pick-up drivers too.

At least with that situation, we know quite clearly the psychology behind monster vanity trucks and compensating for x, y, or wee-wee.

Punching Back at the BMW Menace

The first thing we can do is boycott BMW purchases. Chances are if you’re reading this blog and its sister blogs in the financial-independence-early-retirement canon, You’re not a BMW owner.

The second thing we can do is boycott BMW drivers themselves. That’s right. If your dearly beloved, mother, father, or close friend drives a Beemer, well, sorry.

They say you can’t pick your family or your friends, but in this case, you might have to, for the betterment of society.

If you need an incentive to get a loved one to switch vehicles, suggest a trade-in for a used Honda Fit. Works EVERY TIME. Check Reddit. It’s in there.

The third thing we can do is to write to our representatives in Washington D.C. Inform them that you will not vote for them if they don’t bring a bill to the floor for debate on a “BMW Drivers Luxury Tax”. They need to hash this out in a public forum.

That’s what we pay these guys for! Chances are better than ever with the current administration, that an import tariff could be levied, one that’d put a significant dent in this insidious Bavarian plot.

Other Cars That Contribute to Road Rage

Once I settled down from my little run-in with exhibit idiot “A”, I began to wonder, “What is the opposite of the nefarious blue BMW?” A little research led to these five makes and models:

Maybe if all blue BMW drivers simply traded in for a Lexus IS 350, all of our problems would be solved..? Short of that, we could abduct said driver, and throw him or her in the back of the Chevy Express for an intervention.

Deep-breathing exercises can help. Yoga is good. Riding your bike in a town without a blue BMW is peaceful. I suppose you could just stay home too if walking is out of the question.

Public transportation might be an option, but I’ve seen these jerks cut off city buses.

At any rate, find your inner chi and harness the powers of early retirement bliss. Remember that you have just a few short years to go before you can opt-out of commuting altogether.

Find a walkable city to live in. If you can fetch your groceries and library books on foot or by bicycle, then you’ve got it made.

How to Rehabilitate BMW Drivers

What can you do to rehabilitate your bad behavior? Now that I’ve calmed down a few degrees since starting to hammer in this post on my poor keyboard, I have some rational ideas.

That’s all for today, my friends. I’d be interested to know if you agree with this article’s thesis. Please comment below!