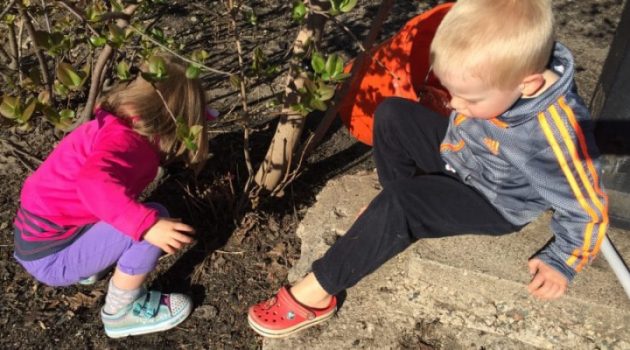 Today’s post is all about the economical and developmental benefits of raising free-range kids. Wait, where are those two rug rats?

Almost halfway through, the gist is pretty clear: Parents have become extremely paranoid about letting their kids go out on their own, even though statistically, our society is just as safe as it was in the early 60s.

The book is a page-turner with many comical anecdotes. Make no mistake about the tragedies of real child abductions – they are sad. This isn’t a book about letting your kids wander off without any preparation or accountability, it’s about applying common sense in a world gone batsh*t crazy over the 24-hour news cycle.

For us who aspire to early retirement, we need to remember that it’s all about the freedom to get out and enjoy this world. It’d be a tad ironic to be pursuing Financial Freedom while keeping junior “on a leash.”

Ms. Skenazy’s tales of mothers getting unhinged when they hear about their kids enjoying an ice cream or movie without parental supervision (my word!) made me recall my childhood. I was about as free-range as all get-out. Growing up in rust-belt Michigan in the 70s and 80s, freedom was the norm for kids.

As early as age five I was walking to school and back, granted it was only three blocks. I remember riding my bike over to my friend’s house, to the park, or to the local 7-11. We spent summertime biking everywhere or just playing in the backyard. If there was a babysitter anywhere in the picture, she was hanging out inside burning holes in the upholstery with her cigarettes.

Later on, I’d walk or bike the two-mile trek to junior high. That sucked in the wintertime, let me tell you. Going to movies or even on “dates” was no issue. Parents would just drop us off and then pick us up a few hours later.

By the time high school came around, I had a curfew of 11 PM and a car to drive one town over where I could find girls to date who didn’t know how much a dork I was at my high school. Not that THAT was the plan. Just worked out (really great) that way…

Are There Financial Benefits With Free Range Kids?

Besides all the logical reasons for letting your kids be kids again, there are some financial reasons to back up the whole notion of free-range kids. I just put the money aspect lower on my list. The key thing is to allow your kids the freedom to explore free from 24×7 supervision, while crammed full with “activities.”

Consider those activities. Do you drive Junior to those guitar lessons? And are those guitar lessons even necessary? That second question is worth asking if Junior isn’t the slightest bit interested in learning an instrument. Gershwin was 12 before he even saw a piano, the author notes.

What about the cost of chaperoning constantly your kids and their friends? Is there an opportunity cost brewing up there? Could you be working that side hustle instead while Junior gets on his Huffy to pedal off to play on his own? I think so.

The greatest cost is this: If you’re not letting your children flex their independence early and often, you’ll raise teacups. The author describes the lamentation of college professors who are observing an ever-growing trend of fragile psyches arriving on campus. They got the golden SAT score, but they probably couldn’t get from one end of Manhattan island to the other without a nervous breakdown.

Did Home Alone simply just scare the sh*t out of every sane parent in America??? Curse you, John Hughes!

Statistics Back Up Free Range Parenting

To further back up the argument, the numbers simply don’t support keeping your children “protected” and indoors all day. A bevy of stats reveals the fact we’re as safe as we’ve been since the early sixties. Your child has a 40x greater chance of dying in a car accident than she would be abducted off the streets.

Rates of severe crime and sexual assault crimes against children have dropped dramatically since the early 90s. Everyone has a cell phone and can report things that much easier. But the point is, the more savvy your kids are with their independence, the less likely they’ll become victims in the rarest of rare events.

This all goes along the same lines you hear about being more likely to be killed by lightning twice (or more) than to be killed by a terrorist attack. It’s true. But you watch the news all day and guess what? Your human brain isn’t conditioned by evolution yet for discerning television from reality. Anderson Cooper has us right where he wants us.

Another facet worth considering from a money standpoint is the insane market for child safety gear. You can spend a fortune keeping your tykes out of cabinets and drawers and cushioning every hard surface and corner.

There are locks for toilet lids and outlet covers, etc., etc. In our house, we managed without doing any of that stuff. We did put the outlet plugs in, but that was mainly for insulation purposes.

Just consider the statistics when you see all these products and question whether there was one single instance that caused all the hysteria. Life is full of bumps and bruises. There will be injuries and even some close calls.

But if you try too hard to protect your children, they’ll never know why it is you’re trying so hard to reach financial freedom. It sure as hell isn’t to sit inside all day watching TV. I’m not here to “mommy shame” anyone, just offering up some food for thought.

What are your thoughts on this controversial notion?